It’s the last month of winter but no need to hibernate. I’ve been out and about the traps and mixing it up with family and friends.

Mr S’s  cousin and his wife and daughter stayed with us for a week. That meant mad cleaning, tidying and sorting of bedrooms before their visit.

While I had to work, we still did some tour guide activities. The weekend they were here was all go go go. We drove up the Central Coast to have morning tea with my sister-in-law. Then we headed to Patonga for lunch. I’ve always wanted to go here but Mr S has an ingrained bent against the Central Coast, perhaps it was all those years of visiting his grandparents. But he was impressed with the natural beauty of Patonga.

The food was meh. Not great, not bad. But the view, the soft sand which we walked on after lunch, the water, the sky. It was a beautiful day. Not warm enough to swim but warm enough to think about it.

The next day I took the wife and daughter shopping. First to a major shopping centre. The daughter needed clothes for the new school year. I am so glad we have uniforms in Australian schools. Saves many a mother-daughter relationship. Problem with entering a shopping centre is a dress that I really liked by a brand I bought in London, popped out at me and it was heavily reduced. OK, I searched through the racks to find one I liked in a style that suited at a discounted price.

After that I took them to the supermarket. There’s a joy in trying foods, especially snack foods from other countries. And there’s a joy in sharing childhood favourites with others. Like Wagon Wheels, Golden Gaytimes, Honey Jumbles.

I’ve been to this local, non-professional theatre before. This time I saw Steel Magnolias with some book club ladies. Attended the matinee which we felt started rather late at 4pm. We clubbers are wild, you know! Great acting, especially considering the actors all hold down day jobs. Even though I’ve seen the movie several times, I still teared up.

My workplace’s annual showcase night. It was long and some performances raw in the way angsty teenagers can be. But some was cute, some amazing, and one song produced goose bumps.

First time ever. Not quite “The Ballet” with capital letters. It was the recently graduated students of the Australian ballet, performing a mixture of pieces; pieces we expected to know. Ballet for the plebs. But we must be more plebeian than we realised as the music for most of the evening was unknown to us. Still, I was impressed and may work up one day to The Ballet.

Just a lovely thing to do. Sit and eat nibbly little things. Over sparkling wine and tea.

Opps! Took the photo after I had eaten a few!

I love Dylan Moran. Saw him live a few years ago. Stand-up comedy is one of the things my eldest son and I do together.  It’s our thing.

Saw one of my favourite Australian actors, Richard Roxbourgh in a Chekov play. Hate Chekov but really wanted to see Rake, I mean Mr Roxbourgh. And The Present was brilliant, entertaining, funny. But long. It wasn’t a tragedy, but turned into a farce.

Roxbough was fantastic.  Cate Blanchett was wickedly sexy. Both of them sustained their energy. They ran on about six or seven times for applause. I laughed! What a cruel trick to play on the actors. Cate did look exhausted with all that running on.

OK, not an outing but his plane to the States left so early, it wiped me out for the day.

Caught up with some people from back in the day, the school day. Was a chat fest and too much bubbly.

For non-Sydneysiders, The Rocks is the “old town” of Sydney. Was cut out of rock and now has pubs, restaurants, tourist shops. As happens with a booked out diary, I was on The Rocks on the Saturday for the play and had lunch at an Italian place and backed up my visit with a return on Sunday. Mr S and I caught up with a friend for a loooong lunch. Actually mainly a liquid lunch, though I had a steak sandwich.

The Rocks deserves a post of its own. And damn it, it will get one.

As a taster: Just below the Rocks is the old wharf area. Also turned into restaurants and theatres – it’s where I saw The Present. There’s a steep cliff down to the wharf road and at the base is this sculpture. Taking the rocks literally. 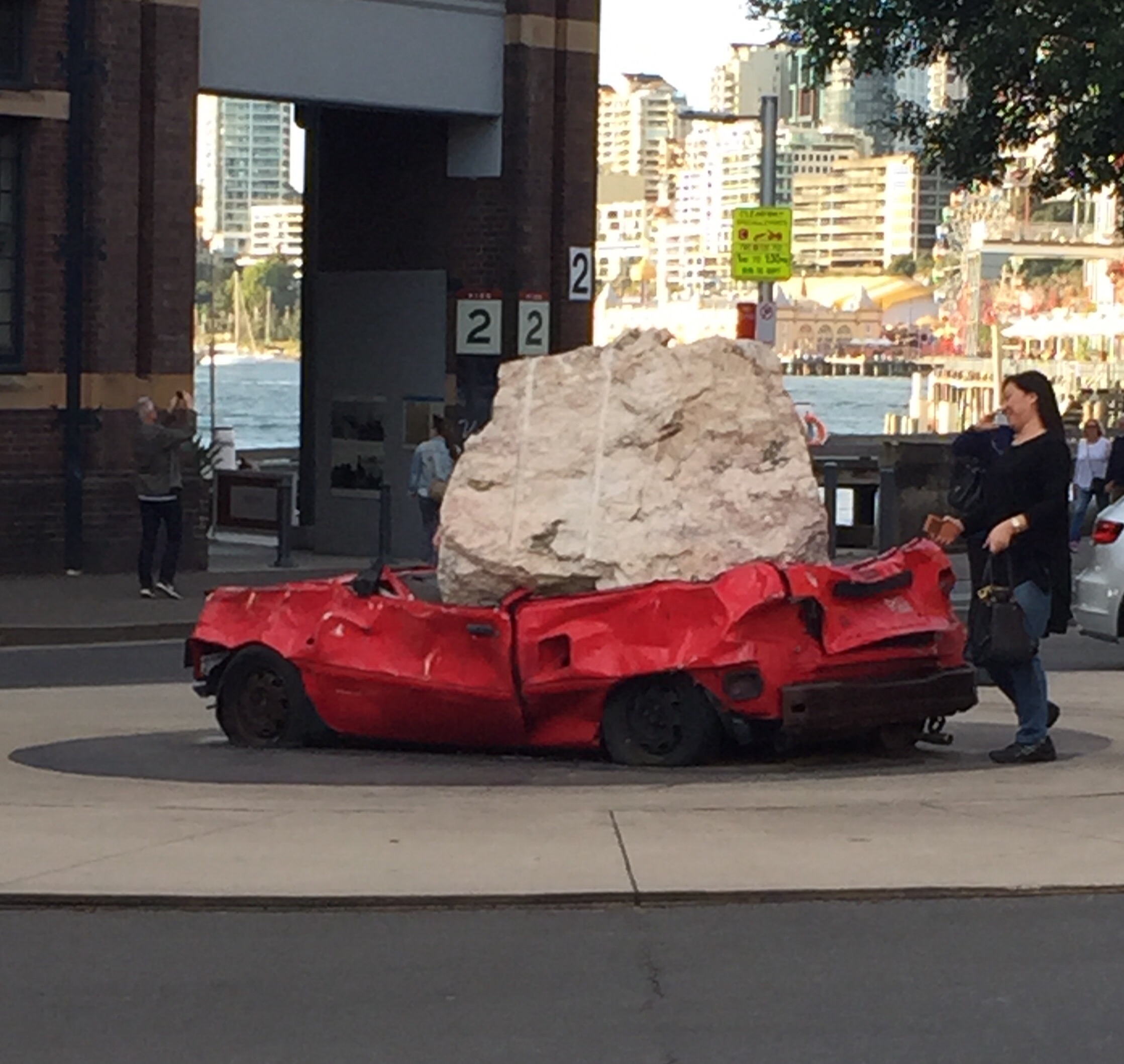 Five live events in one month!!! Five! I’m exhausted remembering it all. And all those other social events.

I need a good lie down.

Which me am I today?