I booked a day’s outing for Mr S and me. A day trip on a vintage train. I told everyone we were going on a steam train. Not that old. It was diesel. Still, pretty old.

Our carriage was a master work of pressed tin ceiling recovered from other carriages and wood work. 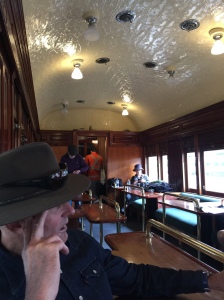 On the way out we were served tea and scones. Very civilised.

We travelled south, along the coast to Wollongong.

Then up the escarpment. 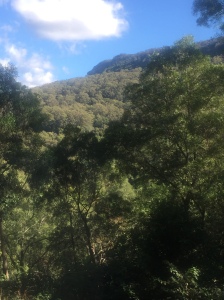 We stopped half way up, from where we had an amazing view of the coast, Lake Illawarra and the now declining steel works.

There’s one big difference between modern and vintage trains. Noise. Modern trains are insulted and you are cocooned from the ch-ch-ch of the wheels, the grinding squeal when wheels are forced to go around slight bends, the rattle of windows, the creaky of the carriage. People shouted to be heard over the noise. When we stopped at stations, the silence was deafening. On the video of us ascending through the temperate rainforest, you will hear the shouting, but not all the other noises – my audio didn’t pick it up. But trust me.

On the side of the tracks, at suburban and country stations, people watched, waved and photographed our train. It’s lovely the impact of heritage trains. I think it is the mystery and sense of adventure. Modern trains, with their quietness, their metal and glass, just don’t have the same sense of romance. 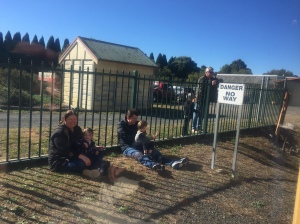 Our destination: Robertson. As it is in the southern highlands, it was much cooler. And breezy. 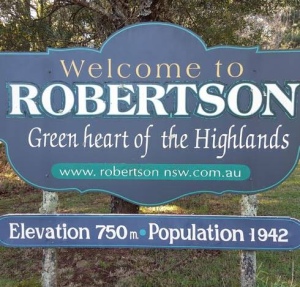 Did Lucinda eat at her namesake?

No, she didn’t. I don’t drink coffee. We headed straight for the pub which had lovely bright decor and lots burning in the fire place. Luckily I had booked a table; there were many people who missed out.

A few beers and we were ready for a hot lunch. They stuffed up our order and gave us two No 5 blackboard specials instead of a 2 and a 5. They were so busy we didn’t bother complaining. We’d never have got our order by the time the train was to leave.

A quick walk up the Main Street. Past the big poo, sorry The Big Potato.

Up to the Cheese Factory.

As well as a cheese factory and cafe, the building contained the most amazing rabbit warren of a store. Second hand, new, upcycled, clothes, jewellery, toys, furniture. Stuff. Lots of stuff. I bought two pairs of gloves. They are so soft and a little fluffy inside. I couldn’t decide which pair I liked. So bought them both. There was a grey pair. I showed restraint and didn’t buy it.

The fruit shop was amazing. So cheap. $3 for a punnet of fat, lush raspberries. And the biggest bunch of basil I have ever seen, for the same price as a tiny bunch in Sydney.

A walk in the golden light and long shadows back to the station. There’s memorials to the fettlers and men who built the railway up the escarpment. It would have been heavy going. The memorial is made of concrete sleepers, topped by a rail indicator.

The station building looks to be made of wood – an easy assumption as we are in the highlands. But no, it is concrete slabs.

The track not taken. We were not heading this way to Moss Vale. The train had gone there to turn around. We were heading back to Sydney. There’s always something evocative about looking out the back window of a train. Not that you can do it from a modern train with the guard or driver’s compartments in the way. Maybe that is why it seems so special?

Back down the escarpment, to the coast.

Our trip back through the south of city was in dark. It felt like more like 9 than 5pm. We pulled into platform number 1 at Central. The country train side of Central. 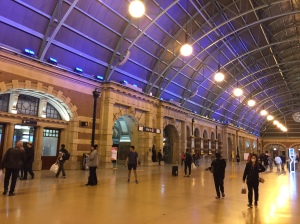 We hoped on a suburban train home. So quiet!

We felt like we were returning from a long holiday to a different place. And a different time.