Remember how I went on The Great Wardrobe Diet in 2013?

No? Well, I’m not replicating it but am adding another challenge to my current list. I have Use It Up for cosmetics and Out With Boxes for boxes. And since the beginning of June I have been attempting to Wear It Out for clothes and shoes.

Part of Wear It Out has been to stop clothes coming in and wear items until they are dead.

See, I have too many clothes.

How many is too many? The amount of clothes I have.

No number. I started an inventory of dresses and skirts but lost count with my tops.

But when clothes cease fitting in their allotted space, you have too many.

I do like new clothes. And buy some regulalrly. But have trouble releasing my old clothes. Mainly because I love what I have.

So my goal is to wear more of my old clothes that are on the just wearable stage and then release them. I will try to stop buying.

Since the beginning of June I have said goodbye to a soft woollen cardie. A lovely shade of pink. It had holes. I wore it a couple of times this winter under a suit jacket, averaging once every second week this term. But the holes were now too noticeable. If I took the suit jacket off, it wouldn’t be a good look. So in June it had its last outing as an item of clothing. I cut it up and turned it into polishing cloths.

Same thing happened to an Alannah Hill skirt. Mr S was shocked when he saw me taking to it with the shears. It was a rich purple and a thick knitted material which would have had many years left. But the lace overlay on the bottom flip part of the skirt was manky and holey and hanging. Last year I gave the skirt an extended life by cutting the overlay off the front but the trim on the back was now just too sad. I also wore out a pair of woollen socks that I have had for years. They have been sent to the shoe polishing box.

I also farewelled a pair of shoes. From the outside they looked OK but inside the leather was flaking away and every time I wore them, my feet would turn a nasty shade of dirty back-brown which was hard to clear from my feet. The dye soaked in!

Since the beginning of June only four new items have entered my wardrobe. Two ski pants (don’t make me feel guilty, yes they were cheap and they were probdbly produced with externalities), a dress at a wonderfully reduced price and a pair of thermal pants. At least some are leaving. Here’s the new dress: 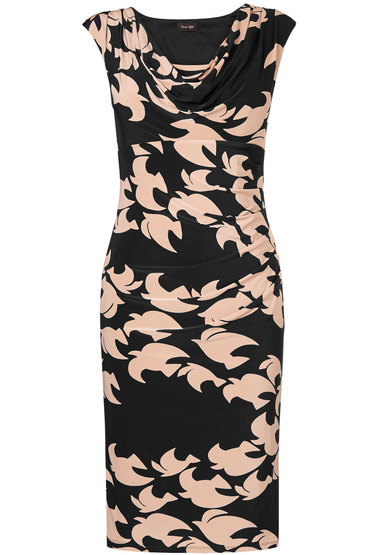 Have you worn out clothes? Or do you change with changes in fashion? When you’re board with an item? If so, do you donate them before they die?

9 thoughts on “Wear it out”

Which me am I today?